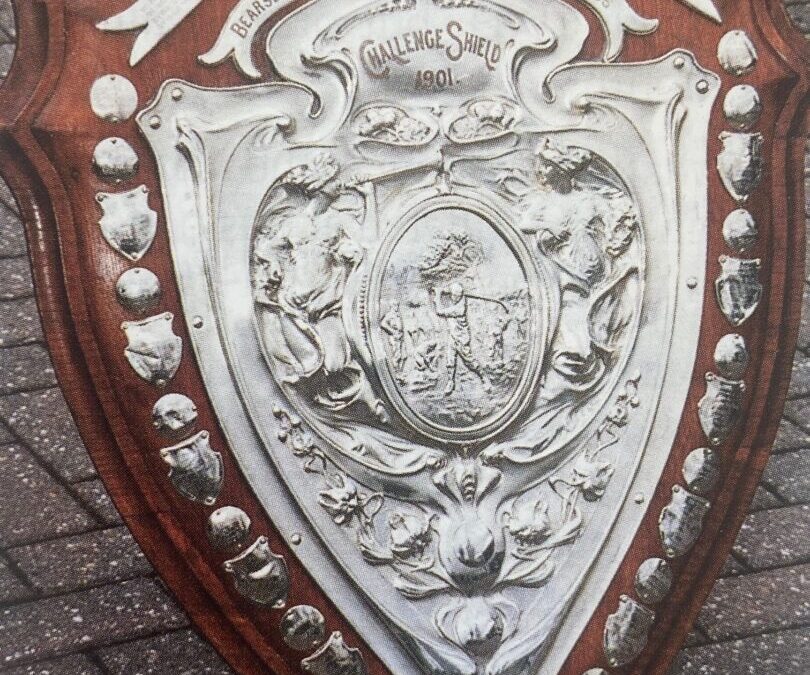 At the D.P.G.C. Committee meeting held in the clubhouse on 23rd March 1901, a proposal was received from a member of Committee, Mr. Ninian Glen, for ” friendly games between our club and the Bearsden club, for a cup kindly offered by himself and Mr. Gow.”  [Past Captain J. B. Gow of Bearsden Golf Club]  It was minuted that “It was recognised by the meeting that the proposed games were not intended as trials of strength between the two clubs but rather as meetings meant to promote friendly intercourse between their respective members.”

In the beginning the format was two matches per year, home and away, played in foursomes, the aggregate of holes won and lost being reckoned to determine the result of each match.  The “cup” idea had now become the “shield” which we know so well.

It was reported in the minutes of the meeting of the Joint  Committee of the Bearsden and Douglas Park Golf Clubs (set up to organise the match) held on 29th March 1901 that “Mr. Sim (Captain of Bearsden G.C.) had kindly offered to provide tea for the players at the game at Bearsden.”, the forerunner of many convivial meals at the two clubs over a period of one hundred years.

Come 1904, the Bearsden club were expressing some disquiet at the format of the match, ( the DP committee minutes do not specify the nature of the disquiet), but the DP committee responded by saying they were not in favour of change at present.

At the meeting of the DP committee on 6th September 1904, Mr. Waddell (possibly the DP Match Secretary) reported that at the match played on Sat. 3rd September at Douglas Park, “it was necessary to play only on the old 9-hole course—.  The Allander overflowed its banks and two of the greens on the lower reaches were under water and through the green there it was unplayable.”  So even then, exceptionally wet weather apparently was not unusual.

Whatever it was about the format, it was still worrying the Bearsden club and at the DP Committee meeting held on 16th November 1906, as a result of a submission from the Bearsden GC, the Secretary was instructed to write back :- ” We agree, at least for the ensuing years, against our better judgement, to fall in with your suggestion, viz:

1) The result to be decided by matches.
2) To play 14 couples, to be played 13 couples plus the Official one.
3) Teams to be arranged according to the aggregate of the handicaps of the various couples.
4) Dates of matches to be fixed by the Secretaries in the beginning of the season.”

These changes seem to have worked satisfactorily for some years, but in 1911 the twice per year format was scrapped and the shield thereafter was played for annually on what was to become the traditional date of the first Saturday in June.

There used to be an old joke told from time to time about two Bearsden men who survived a light aircraft crash when it came down in the Sahara Desert.  On the third day of blistering heat trudging across the sand towards civilisation, Jim said to Dave,

“What date is it today?”  Dave replied, “I don’t know the date but I think it is the first Saturday in June, why do you ask?”  Jim said, “This is the Gow-Glen Shield Match today.”  “What of it” said Dave.  Jim replied, “Well, they’re getting a fine day for it!”

At the DP Committee meeting on 27th April 1908, it was reported that “in connection with the forthcoming match with Bearsden, it was remitted to the House Committee to make the necessary arrangements and to propose tea and cakes and free of charges, but liquid refreshments to players only without charge!”  One can only speculate as to the implication of these arrangements.  Performance enhancing alcohol?, officials over-imbibing at previous matches?

The local paper often carried an account of the annual match in its columns.  The Milngavie and Bearsden Herald of 23rd May 1902 states that the May match was played 19 couples per side, Bearsden winning by 33 holes to 28 holes at Bearsden, and at Douglas Park later that year on 19th September, Bearsden again won, this time by 44 holes to 39 holes.  By 1903 the team numbers were up to 26 members a side so maybe this was the nub of Bearsden’s disquiet, or maybe 26 per side were able to consume too many nippy sweeties for the clubs’ budgets to cope with.  In the M and B Herald of 11th September 1903, it was reported that the match was held at Douglas Park after the formal opening of the new clubhouse and extended course, and the paper goes on to say that “It is proposed to give over the original clubhouse for the use of the ladies section of the club.”

I say, steady on chaps, don’t let’s get carried away with the old generosity now.

The match has become a much enjoyed tradition in both clubs over the years, at times keenly contested, contrary to the wishes of the donors, but always an enjoyable occasion perpetuating camaraderie between the two clubs.  The origin of Douglas Park Golf Club has its roots in Bearsden Golf Club in an odd sort of way.  Will Gibson was Captain of The Bearsden Club in 1896, and the following year he was instrumental, and one of the prime movers, in the creation of The Douglas Park Club.

Tales about the Gow-Glen Shield Match have abounded over the years, many now forgotten.  [See pages 15, 38, and 39 in the DP Centenary Book, and pages 45 and 46 in the Bearsden Centenary Book]  There was one occasion after the revelry following the match on which the shield was lost and was found next morning under a hedge in Roman Road.  Legend has it that that on more than one occasion when Bearsden were the victors, the shield was carried in triumph to Bearsden Golf Club held by a player sitting astride the bonnet of the local fire engine.  There was a tradition for many years which seems to have died out that, after the post-match meal, and the consumption of varying quantities of alcohol, friendly challenge matches were played in the evening between energetic but not very co-ordinated players.  Some members can still remember the years when the original clubhouse at Bearsden was not commodious enough to accommodate all the participants for the apres-golf meal and social activities and this problem was overcome by a marquee being erected for the occasion close to the clubhouse which added greatly to the atmosphere of the day. 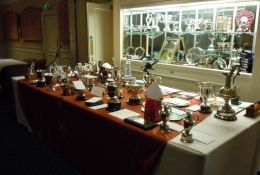